Information and updates for Elder Scrolls Mod. If you have any questions or suggestions for the mod, please post them here.

This thread is for the discussion and brainstorming characters' backstories and mechanics (skills and builds). Post here is you have ideas about skills, character mechanics, features etc.
This is the presentation concept art for the character classes. It's not very detailed but it wasn't supposed to be in the first place. It's just to give the community a general idea what the classes would look like and to support the backstories. It was done in D2 character selection screen style on purpose 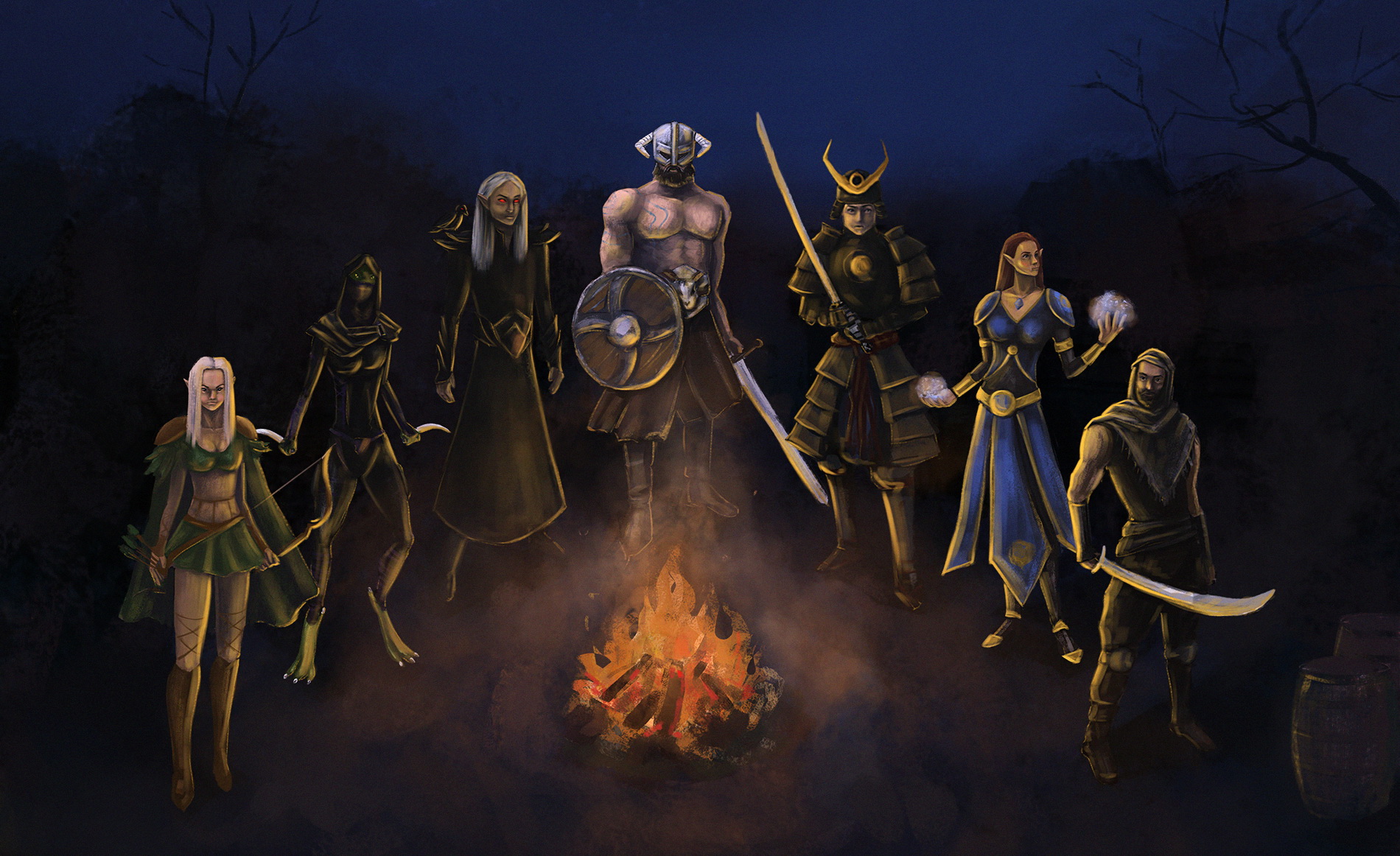 Concept art by Ivan Melnychuk
The order of characters is from left to right.

Jaqspur (Bosmer, female)
Backstory:
She was an elite archer from Silvenar’s personal security, the Voice of the Bosmer People. She had a special bond with the Green Lady, Silvenar’s wife. They were like sisters. She protected her Lady with great devotion and saved her life many times, sacrificing her own. However, after the Thalmor-backed coup in Valenwood, Silvenar and the Lady had to choose – support the new government or die. The day the Thalmor came after them, she and the other Jaqspurs were ready to give their lives for Silvenar and their Lady. But there were too many of them. Silvenar died from an arrow of a Bosmer-traitor. At that moment, the Green Lady’s bestial nature was irrevocably unleashed. Her fury turned on all those involved and it reigned until she joined him in death. Her last words to her devoted Jaqspur were. “Find the way to bring justice to Valenwood.” All those, who didn’t support the new government, were killed and she had to flee. She joined the rebels and promised herself to bring justice to her country.

Mechanics:
Jaqspur is a blend of Amazon and Druid. She wields ranged weapons – bows, xbows, throwing knives, spears. She wears light armor. She has a strong bond with Nature and can summon the spirits of the Woods.

Shadowscale (Argonian, female)
Backstory:
She was born under the sign of Shadow. According to tradition, she was given to the Archon’s training center, where she was meant to become a Shadowscale. She became one of the most outstanding students. All this time, she had been thinking about her parents, who died in Lilmoth, when the floating city Umbriel appeared over the town, and the armies of the dead killed all flesh. Revenge was driving her, and An-Xileel took advantage of it, manipulated her, giving the sanctions to kill the people, which they considered useless, proving to her that they were responsible for her parents’ death. One day, however, she found out the truth – it was An-Xileel, who were responsible for the death of her parents and thousands of other Argonians. (Hierem, the Chief Minister of the Emperor Titus Mede I, arrived at Black Marsh to perform the ritual summoning of Umbriel in Tamriel. An-Xileel, the ruling faction at the time in Black Marsh, gave permission to Hierem to perform the ritual with one condition – Umbriel should kill only non-Argonians and the Lukiul, the Argonians assimilated with the Empire. An-Xileel took away the children of the Lukiul to be trained as Shadowscales, their personal assassins, in the newly opened training center in Archon). She tried to assassinate the An-Xileel leader, but he had too many well-trained guardians, while she was alone. She had to run away. At that moment, the Thalmor started their invasion and she joined the resistance. She promised herself to take revenge on An-Xileel after she was finished with the Thalmor.

Mechanics:
Prototype of a classic Assassin. She is good with short weapons, like knives, katars, and scissors. She can sneak and sometimes become invisible. She also has poisoning skills.

Conjurer (Dunmer , male)
Backstory:
His earliest memory is the dark-red sky and piles of ash everywhere. During the Eruption of the Red Mountain, many Dunmers died. This event became known as the Red Year. Immediately after this, an Army of Argonians launched an attack on the weakened Morrowind to recapture the territory, which belonged to them by right and to restore historical justice. House Redoran summoned everyone, who could hold a sword to stand in defense of their country. His parents died during the Battle for Mournhold. House Redoran took him in and he was brought up among the noble Dunmer. He studied magic and started developing an interest in Necromancy. Later, he joined the College of Whispers to study at the School of Conjuration and became one of the most outstanding Conjurers. In 4E 48, when Umbriel approached the Imperial City, together with other College members, he helped to protect the city from the hordes of the dead. This battle both frightened and amazed him – such power could bring the whole city from Oblivion to Tamriel. He devoted his life to studying this power. For many years, he had been learning the secrets of the universe and summoning Dremora for questioning. Then, a new threat arose – the Thalmor. They started their Second War with the Empire and this time, they decided to end the Empire’s existence. The College members sided with the resistance and their best Conjurer set off to help them.

Mechanics:
Master of the School of Conjuration and Necromancy. Can summon one powerful minion or a small army of less powerful minions. Can summon Dremora of different ranks (Churl, Caitiff, Kynval, Kynreeve, Kynmarcher, Markynaz,Valkynaz). Can resurrect enemies to fight on his side. On higher levels, can open an Oblivion Gate that will spawn many daedra. Can animate weapons too.

Dragonborn (Nord, male)
Backstory:
After the events of the Dragon Crisis, Dragonborn started helping Nords in restoring their destroyed cities and villages, without choosing sides – neither the rebels’, nor the Empire’s. He managed to build a reputation of a righteous man, who didn’t look after his own interests in whatever he did and was able to gain the trust of both camps. But the Thalmor realized that such a person/figure could successfully unite the two opposing forces and decided to eliminate him. However, they underestimated Dragonborn’s power. After several unsuccessful attempts, they decided to hit Skyrim’s weakest places, killing women and children, and almost completely destroying the Imperial legion. Dragonborn couldn’t just sit back and watch, so he started acting…

Mechanics:
Prototype of a classic Barbarian. Wears heavy armor. Wields a sword and a shield perfectly. Uses Thu’um – dragon shouts to buff himself and party, debuff, knock back and damage enemies. Can morph into a Dragon. Can also summon a dragon companion to assist in battle.

Blade (Imperial, male)
Backstory:
For 30 years, the Thalmor had been successfully exterminating the Blades. During the events of the Dragon Crisis, there were only a few of them left. After defeating Alduin, the new grandmaster Delphine set up the Blades’ headquarters at Sky Haven Temple and together with Dragonborn started recruiting and training new members. When the Thalmor started the Second War with the Empire, it destroyed almost all the garrisons of the Imperial army. One soldier somehow managed to survive. He ran away when all his brothers were killed. He didn’t know where he was running. He just wanted to run away as far as possible. He ended up in Bloated man’s Grotto where he had been hiding for several days. There, he found a Shrine of Talos and a note, which said. “To he, who finds this, know that I, Acilius Bolar, last of the Blades to survive the attack on Cloud Ruler Temple, took refuge here, in this ancient sanctuary. The Thalmor have come for me, but they shall not desecrate this place. I go forth to meet my death with honor. If you are worthy, take up my blade and do the same.” There, under his feet, lay the Oathblade. As soon as he picked up the blade, fear left him. He joined the Blades in their new Temple and gave an Oath to bring an end to the Thalmor.

Mechanics:
He is good at wielding two-handed weapons, especially Akaviri Katanas. He wears Medium Armor and draws power from his loyalty to the Emperor.

Arcanist (Altmer, female)
Backstory:
She was born in a noble family and was brought up in Altmer tradition, which was to treat her own race as superior. She was smart, talented and had been demonstrating outstanding magical abilities since early age. Her family used its connections to send her to the College of Sapiarchs to study Arcanology. She was marked for greatness. It all changed when the Great War started. She couldn’t just stay away and observe the horror happening around her as if it didn’t concern her. And it did concern her, especially after her father was murdered for standing up to the enemy and her mother was taken by the Thalmor in a violent overthrow of the ruling Altmeri monarchy. To survive the attack, she had to run. But she swore to return and avenge them, restoring their good name as the true rulers. She joined the Synod where she could further study and practice her magic and together with them fight against the Thalmor, knowing that’s where all her training and skills would come in handy…

Sword-singer (Redguard, male)
Backstory:
He grew up on the stories of Frandar Hunding, sword-singers and Ansei warriors, who had the ability to manifest a sword from their very soul, known as a Shehai or “Spirit Sword.” He had been dreaming of becoming one of them for as long as he could remember. But for Redguards all these stories remained just a myth and very few people believed them to be true. When he turned 11, he went to Skaven to study martial arts in the Halls of Virtues of War (according to legend, children at this age started training). He worked hard to achieve his goal and soon he surpassed his peers in the mastery of the sword. In the past, mastery of the Way was achieved upon completing the Walkabout - a wilderness trek emulating the life of Frandar Hunding, where singers would wander the countryside defeating monsters and aiding the citizenry in the name of virtue. And when the Thalmor started the occupation of Hammerfell, he set off to help without a doubt.

Mechanics:
prototype of a battle-mage. Sword-singer’s weapon of choice is a sword. He wields both a sword with a shield and two swords. He has the melee skills and spells. On higher levels, a sword-singer can summon a Shehai, a spirit sword, which he can not only can hold in hand but also throw at his enemies.

Although it looks a little ugly
Top