This forum is for members of the public to post any announcements relating to Diablo 2 Mod Making including mod and patch releases amongst other similar subjects.
Post Reply
1 post • Page 1 of 1

This mod is made especially for singleplayer or multiplayer untwinked gameplay. It is when one or more players decide to start new characters and without muling go through game up to Baal on Hell Difficulty. The goal is to make this journey challenging, while preserve fun, diverse game rich in builds. Let's talk step by step about the changes.

Let's think about AR and DR in this way. When your AR is the same as enemy DR, you have 50% Chance to Hit.
It means it gives you in average 0.5 damage multiplier. When you increase your AR to great values, your CTH tend toward 100%, which means it tends to gives you double damage relatively to previous situation. Natural is to think, that AR and DR should works the same way in both directions. So When your enemy increases his DR to great values, your damage should tend to be halved. In the terms of percentages it means, that your CTH should tend toward 25%. Which is not true in original game, because it tends to be much lower, from 0.5 to 0.05, it is ten times lower. That is why it is meaningless to try to do some basic attacks with characters whose are not focusing heavily on this style of play.

Furthermore, CTH is not dependent on Attacker Level or Defender Level, which in original game punishing players for going through game too quickly and rewarding those who are returning to previous areas for better gear."

"In the mod, the chance to block works as in Classic Diablo, so anyone can use its potential, when he find a good shield. The main problem with blocking in LoD is that it scales linearly, but effective hitpoints provided from its damage reduction scales much faster than linearly when you are close to reach max blocking. So it is either meaningless with small investment in dexterity, or it is overpowered, when you max that out."

- Chance to block independent on character level and dexterity. The exact value from shield is used.

"It is a shame, that such exciting idea of runes was implemented so bad. It is impossible to collect high runes during your journey through the game. So you experience this aspect only marginally. On the other hand, runewords added to the game in patch 1.10+ are ridiculously overpowered so you either have nothing, or get the runeword and have everything. Allowing only 1.09 runewords to be used unlock for this mod the possibility to greatly increase chances of dropping high runes. So you have good chance to make some reasonable runeword or just socket your unique item with high rune to make it even better.

The rule, which define the quality of dropped runes is as follow:

- Only 1.09 runewords are now enabled.
- Drop chances for runes was changed as show following table. 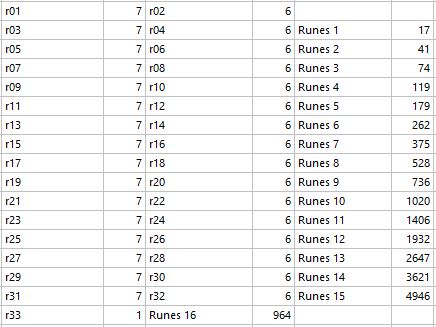 "Because there is no runeword using Zod rune now, its original efect is no more desirable. We will change it to another late game valuable effect, that players probably find worthy in every situation."

- Indestructible magic affix was changed to provide +14% to max life/mana/stamina. This applies also for Zod rune.

"This will affect items spawned in Magic Quality."

"Enlightenment doesn't have to necessarily mean how far you can see."

- maxic affixes providing +x to light radius were changed to +x to all attributes. This applies also for El rune.

"As you will see in the next changes, the game will be much harder, than in original Diablo. That is why you will be strongly dependent on gear you find through the game. To ensure players can prepare well for more difficult stages of the game, they will be rewarded more for sacrificing attributes in favor of seeking for better equipment."

"This will make your eventual magic find runs more sucessfull, not only in terms of magic items, but also non-magic items will be spawned in better quality and thus with more sockets to make better potential for your gems, runes and jewels."

"To make sure players have good chances to use gems in effectively improving their characters, we are increasing the socketing possibilities."

"We will not overlook skulls in the mod."

"In original, other gems has 50% better chance to drop compared with skull."

"Self-repair affixes will now heal minor injuries which you could suffered."

"Some useless magic affixes were removed."

- Charged and Procing magic affixes was removed with exception of Amplified Damage.

"Possibilities to overcome stagnation is something this mod supports. The littlest thing you can do, when you get overhelm by the difficulty, is to try to increase your character level."

- Experience gained from monsters are no longer reduced according to difference mlvl-clvl nor by diminishing return on 70+ lvl.

"On the other hand, when you are in high level areas, you always get the full experience from a monster as a reward for killing him, which can often be not an easy task."

"With all this help to a player, a lot of changes, which make game progress more deserved, coming too."

- Healing and Mana potions are restoring points only at 50% of its original rate.

"Now, the potions get you much less comfortable during the fight, while preserve its recovery function between fights."

"In original game, the real difficulty starts in late stages of the game. This mod tries to make you enjoy the challenge from the very start of the game."

"One of the problem in vanilla is that investing points in vitality gets you unproportionately tough very quickly, which makes also investing in other attributes much less attractive for players."

"Synergistically with previous two changes, this will make bonuses to stamina, reducing freeze or poison duration as well as increasing cold and poison resistances much more desired."

- Removed Stamina, Antidote, Thawing and Throwing potions from the game. The game will choose another item from the same TC to drop instead of them.

"The game will also drop something instead of useless throwing potions."

"Hirelings are important supplement to make your party strong enough to counter boosted enemy monsters. Removing auras from desert mercenaries will make other hirelings being considered supporting diversity as well as prevent game being too easy with large team having so many auras."

"This will also make auras unique again. If you want auras in your party, probably someone has to to play the Paladin."

"This mod tries to make every attribute of an item potentially important for the character. With lots of charms in your inventory, the effect of your gear you are wearing is shaded."

- Removed charms from the game. Instead of charm, the game generates amulet, ring or jewel with 1/3 chance to each.

"This will make more space in your inventary and increase importance of each item you wear. Also ratio between ring, amulet and jewel drop is now more balanced. It was 4:2:1, now it is 5:3:2."

"Making monsters more deadlier is one of the feature this mod offers."

- Enemy chance to critical hit was increased from 5% to 25%.

"Having mana is a privilege, not certainty."

- You can no longer buy mana potions.

"Rewarding players for wearing heavy armors and weapons across the all character classes is one of the goals of this mod. Heavy armors will be the most certain way of protecting yourself from savage monsters in close range. Using heavy weapons will not help only warriors in clearing areas out of spawns of hell, but will also benefit spellcasters, increasing their rate, at which they cast spells.

You will receive physical resistance based on your armor defense. Because we want to make it scale linearly, we need to think about it in term of +x% to effective life and then transform it into resistance.

You recieve +1% to effective life for every 30 armor defense.

The formula, that converts it into physical resistance is as follows:

You can see for example, when you have 3000 armor defense, it should gives you +100% to effective life,
which is exactly what 50% physical resistance does.

You receive +1% faster cast rate for every 5 weapon damage.

This bonuses apply also to hirelings."

"The major change of this mod is adding monsters their own hpregen, that cant be prevented in any way. This makes game punishing you radically for slow killing of monsters. It is possible for monsters to make their hp doubled or even tripled druing the process of killing it. Another desired consequence is, that with more players in the game, monsters grow radically in strength. It can happen, that you just can't kill the monster, especially in the case of end act boss. You have to try to inflict as many damage as you can to make game reward you or you will be suffering. You will have to play more risky builds to be sucessfull, especially in fight with end act bosses.

Important to note is, that when you teleport to town, monsters regeneration will stop. So town aspect is still important during the boss fight, however in multiplayer you need to play more coordinately to benefit from this.

- All enemies has passive hpregen stat(in addition to their normal damageregen) with value depended on type of monster: