This is the place to discuss all issues relating to the manipulation of graphics/animations, sounds, music and cinematics within Diablo 2.

I found some information that perhaps might be of use to people modding the games.

First of all, the Amazon has some weird looking animations for their shields. Namely, the bone shield. Their bone shield, in the blocking animation only looks different from their other animations. This animation as far as I can tell is used by the game. 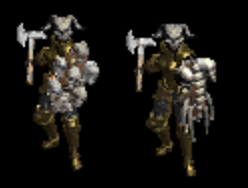 Second, the Paladin has some interesting leftover animations. You all probably know about their torch and flaming sword animations, but did you know that they have some pretty different helmets too? These two helmet designs are on an unused animation (A2, weaponclass "hth" which doesn't get played). They're an early version of the bone helmet and an early version of the Full Helm. There are actually some old prerelease screenshots of the Amazon wearing this older style bone helm but I wasn't able to track down the helmet. Until now. The full helm has a more frilled, Roman-like look to it. 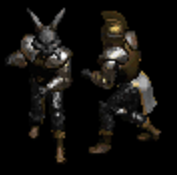 Third, the Assassin has throwing animations for broadsword (weaponclass "bsd") and the axe (weaponclass "axe"). They were probably included since there was the idea to have magic items that could be throwable as a property but this never got completed. Likewise, the Paladin has throwing animations for almost every one-handed weapon in the game, except their flaming sword.

Fourth, the Paladin has blocking animations for 2-handed weapons despite not being able to block with those. They have throwing animations for a "pot" item on hitclass "hth" that turns half their body invisible.

Almost all classes have variations of the throwing potions as "1hs" instead of "1ht". Usually this is pretty minor, but for example on the Paladin you can see that they wanted the spell casting animation originally to be quicker but they adjusted this later on.

Although done for our needs, mod-makers should like these changes, too.

I knew about the Assassin bone shield block animation

But the rest is new to me. Thanks. Very interesting.

The amazon you show in the screenshot seems to have a specific SH animation for the unique bone shield (Wall of the Eyeless) . Very interesting!
Terms of Service