Description: This article explains a lot of information about DT1, that have not been discovered before.

Hello everyone. Today I am presenting you the results of my recent research on the .dt1. There is Paul’s article, which describes .dt1 format from a programmer’s viewpoint. However, some of the important info is missing or is incorrect. This article, on the other hand does not describe the code, but is designed as a guide to a person who wants to create new tilesets, maps and environments.
There are 3 indexes that identify and categorize a tile: Main Index, Sub Index and Orientation. These indexes decide where the tiles will appear in the DS1 editor window, when you right click.
First number is Main Index, second number is Orientation and the third number is Sub index. 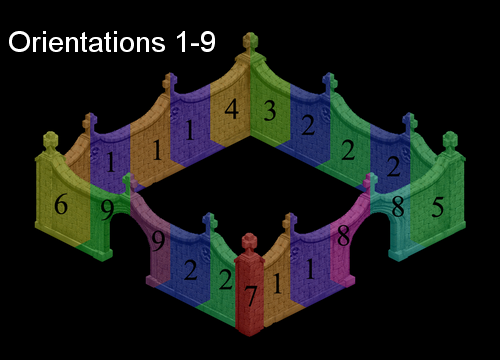 There is one more very important index: Direction. Paul found 5 Direction indexes and he states that they do nothing. However, I found 9 indexes and I found out its purpose.
Direction does not categorize the tile and it doesn’t show up in DS1 editor. It decides how the light will affect the tile. This is very important when you want your new tile to look good. Direction works together with Orientation. You must always use the appropriate Direction index with its respective Orientation index. Here’s the list of all Direction and their respective Orientation indexes.

Here is a demonstration how some of D2's buildings are set up. I was doing this primarily for myself, but later decided to share it with everyone. This would be help you understand how to set-up elements if you decide to make new architecture. After analyzing and studying these examples I learned a lot and want to share it with you. I didn't make all D2's buildings, because these demonstrate basic and interesting set-ups. 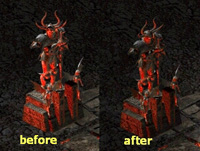 Have you ever wondered why do the Death Knight Statues in River of Flame turn their heads when you walk next to them? Is it hardcoded behaviour? Animated objects? Dark magic? - No. It's the same mechanism that makes the Act 1 Cottage's roof disappear. This is done with the help of special tiles - they remove one layer of wall and reveal the other. In case of Death Knight statues - there are 2 statues on top of each other. When you walk up to a statue, one disappears and the other appears. Yes, it's that simple

Special Tiles are the tiles that are present in the "Special" section in Ds1 Editor. They do various things. Here is the list of what they do.

We will talk about Special Tiles #47-74 in more detail. But first we need to understand what roofs are. 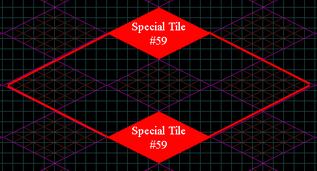 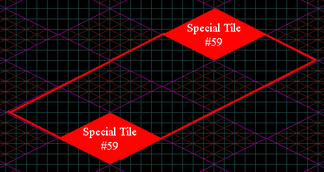 In Lvlprest.txt there are two columns that have connection to this.
Pops – The number of Pads (shapes) you use in a .ds1. For example Act 1 Cottage uses 2 pads and Act 1 Countess Tower uses 1 pad.
PopPads –the size of the trigger pad in relation to the area defined by the special tile. It's an offset in sub-tiles. 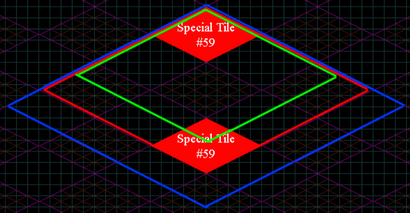 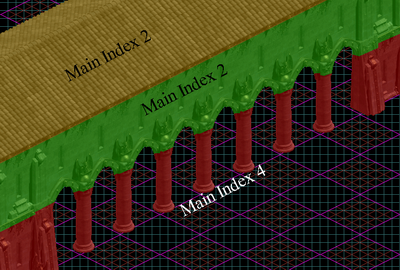 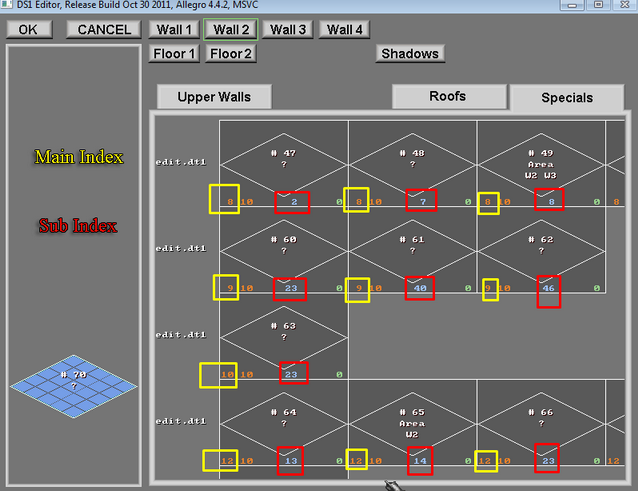 These three Special tiles belong to one Group, so it means they will remove everything together. 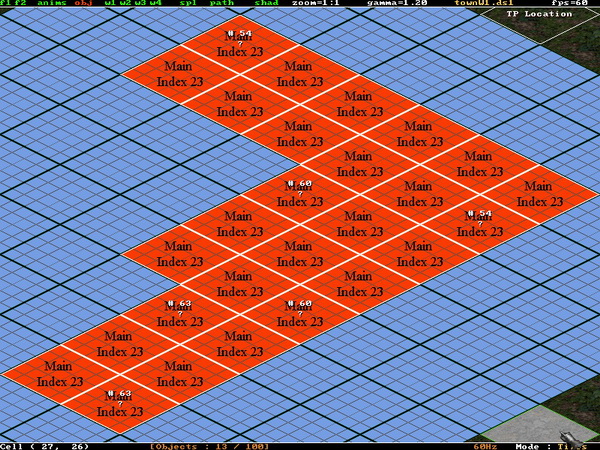 But now look at Special Tiles #66 and #74. They also have Sub-Index of 23! But they belong to different groups (#54, #60 and #63 from Group 1, #66 from Group 2, #74 from Group 4). It means that they will remove the tiles separately.
But remember: don’t use Special Tiles with the same Main Index together (for example #47 and #48). You will encounter bugs.
So, basically, if you use tiles from 4 different groups, you can have 4 removable areas at the same time. You just need to set the appropriate Main Index for your tiles and use their respective Special Tiles.

In the table below you can find all information about Special Tiles #47-74.

Next I will talk bout out one thing that was shrouded in mystery despite 10+ years of D2 modding. I’m talking about the wall transparency, or in other words wall fading. This happens when the character is behind a high wall and the wall goes a little bit transparent so that you can see you char behind it. For a majority of D2 modders this may seem irrelevant and unnecessary feature, but for those who work intensively with maps and especially for those who want to create brand new tile sets (like myself) this is crucial. Also, it’s very easy to miss a treasure chest or monster, and if you’re going hardcore it may be very dangerous.
So, now the mystery itself – was pretty obvious. I’m surprised that no one discovered this before; I asked many people and no one could help me.

So, I will explain how this works. I will use “Inner Cloister” map as an example. First, to be able to understand how the transparency works you have to know what “Orientation” is in DT1 settings. You can read about Orientation in Section 1 of this article.

The “secret” of transparency
The whole secret was in the fact that transparency happens when the walls are connected in one “chain”. It means that all the wall tiles must be joined together. 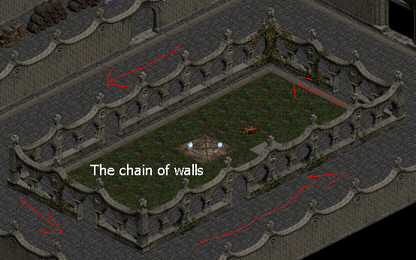 If you delete one element the transparency will be broken. So, from now on I will call this chain of walls – a box. 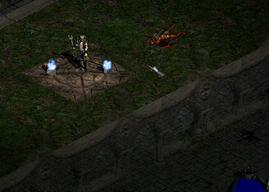 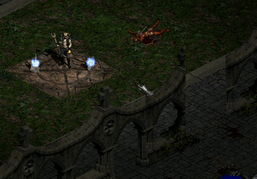 Here are some more discoveries:
• You can resize your box to whatever you want.
• You can have many boxes - a regular map is a box itself.
• Wall of Orientation 7 are not necessary for the box.
• Order of sub-indexes is not important in the box
• You can use different main indexes.
• “Logicals” column in Lvlprest.txt turn on and off the transparency.

Ogodei also discovered that you also need to have the "Tile Sound" setting in your .ini file set to 0. If you have it to something other than 0, your walls won't fade.

If you haven't set and cut the corners as Blizzard wanted, you can always create a "Fake Wall" consisting in orientation 3 + orientation 4 walls and place it as the first layer wall, then hide it with the ds1 editor.
You can use the same trick to make walls fading even if the "box" is not enclosed, by placing fake and fully walkable (hidden) walls

So, I hope this will be interesting to some people after all these years. Good luck!

Link to this article: Select all